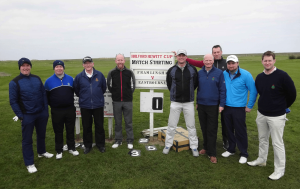 The Halford Hewitt was founded in 1924 and today involves the old boys (and sometimes girls) from 64 English and Scottish public schools which each field five foursomes pairs, making 640 competitors in all. It is played each Spring at Royal Cinque Ports and Royal St George’s Golf Clubs with a Plate competition for teams that have lost in the first round at Prince’s Golf Club.

The Old Eastbournian Golf Society was founded in 1932 “with the primary object of raising a team to compete for the Halford-Hewitt Cup”. We first entered the Hewitt in 1932. Our first meeting as a Society was however on Sunday, 26th June 1932 at Willingdon GC.

Our greatest moment in the Hewitt came in 1992 when in the first round we beat the defending champions, Shrewsbury. With a difference of 375 in our respective ratings, this has been assessed as the third biggest ‘Giant Killing’ of all time. Our most difficult time was between 1959 and 1973 when we failed to win a single match. We have never won more that 2 rounds in any year but, despite this, we did reach the Quarter Finals in 1933.

Research has however revealed that Eastbourne College Old Boys did win the Halford Hewitt Cup in 1971. The only trouble is that this was “over a steep giant slalom course at Davos”, so it seems unlikely that this had anything to do with golfing prowess.

In terms of individual Eastbourne players in the Hewitt, brothers Brian and Robert Meaby dominate. Brian played from 1956 to 2010 and Robert from 1958 to 2002. 121 games between then, but never as partners. Brian has played most games (67) but Robert won more (25). Brian holds the all-time Hewitt record for the highest number of different partners (32). 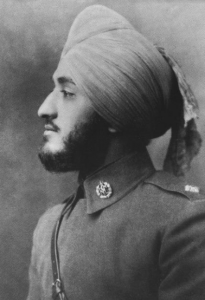 Perhaps our most historically interesting Hewitt player was Hardit Singh Malik (1894-1985). H.S.Malik was the first Indian High Commissioner to Canada and also the first Indian to fly as a pilot with the Royal Flying Corps in the First World War. An outstanding cricketer, he played for Oxford where he also gained a Blue for golf. He played for Eastbourne in the Hewitt from 1932 to 1934 and later represented India in the Eisenhower Trophy along with his brother. He had the distinction of having played with Harry Vardon, James Braid and J.H.Taylor, having had an arm wrestling match with Bobby Jones in 1921 (which was drawn) and even played golf with Ben Hogan in an exhibition match in Paris in 1953. 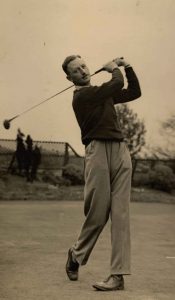 R.A. “Bobby” Howell played for Eastbourne between 1932 and 1939. He was Sussex Amateur Golf Champion in 1929 and 1937 and runner-up in 1938. He served with distinction in the RNVR during the Second World War, taking part in the Battle of the Atlantic against the German U-Boats. He was killed in 1945 when his corvette, the Vervain, was torpedoed off Ireland.