There was nothing common about this long-awaited encounter between the Eastbourne College Common Room team and the OEGS. In fact a closely fought 4BBB stableford match ended in an uncommonly exciting last minute long distance putt by new OEGS player Claire Patterson-Snell on the last green, which secured an overall draw in the match.

The day had started with a flurry of excitement as the Common Room Match Manager Ian Sands was faced with some 11th hour drop-outs from his team, requiring some rejigging of the pairings and resulting in some ‘pairs of one’ on the Common Room team. Mr Sands himself bravely took on the Henley (junior)/Lorton combo on his own in the first group out, with OEGS Match Manager Ian Henley teeing off in glorious sunshine as the town hall clock struck 2pm. but, after falling behind after 2, Mr Sands fought back on the 3 following holes and faced only a 3 point deficit at the turn. But the weight of playing for 2 eventually wore him down and the OEGS team secured the first win of the day 37 to 32.

Meanwhile in Match 2, the experienced OEGS pairing of Tony Dunn and our very own Honorary Secretary David Burt (also Fixtures Secretary, he reminds me…) faced another solo starter from the Common Room team, Matt McVeigh. The OEGS team may have been blessed with our Fixtures Secretary but this group decided to use a match play format just to keep the Match Manager on his toes. Maybe it was the nonconforming format but the OEGS team succumbed in the first nine to a Masterclass from Matt, who was clearly not cowed by flying solo. After going down at the first, he fought back with a birdie on 2 and then a string of pars to reach the turn 3 up. A valiant fight back from the OEGS team on 13 and 14 could not stem the tide and the Common Room recorded a 3&2 win.

The Match Manager of our previous week’s match against the Eastbourne College Boys, Peter Henley, was teamed up with Rob Petrides against Ollie Marlow and Mark Turnbull (paying a flying visit from his new school in Giggleswick, Yorkshire). But Henley senior was, as in the previous encounter, faced with a 2 foot putt on the last to win the match and was revisited by those big match nerves, seeing the putt slide by and the match drawn 34-34. The match highlight however must be poor Mr Turnbull, who, having pushed his drive from the 3rd onto the 7th green, was forced by the ‘officials’ in a serious REGC vs WGC match to wait whilst they played their approach shots into the green and then had to play his second shot under the watchful eyes of the large gallery. Inevitably the shot was fluffed…

Chris Howe from the Common Room team also faced the prospect of a solo start but the cavalry rode over the hill just in time, as Dr David Price heroically overcame various family challenges to show up in the nick of time to face the big-hitting Patricia Seath and the OEGS low-handicapper of the day, Jack Hughes – also our youngest player of the day and a very welcome injection of young blood to an otherwise mature team. After going ahead on the first 2, the OEGS team faced a strong comeback from the Common Room, with David notching up a 4-pointer with an impressive gross birdie on the par-5 5th. But Patricia responded in kind on the tough stroke-index one 7th, leaving this high-scoring match match evenly matched 21-21 at the turn. A par from Chris on the long uphill par 4 10th got the Common Room off to a strong second half start and, despite an impressive 4-point birdie from Jack on the 12th, they kept their noses in front to run out 43-41 winners.

And so to the last group, teaming up OEGS President Chris Walker and debutante Claire Patterson-Snell against a fearsome-looking challenge from Adrian Ashby and Dan Fathers -12 and 11 handicappers respectively. Claire was showing the benefit of a 9-hole warm-up with her husband in the morning and led off with a 4-pointer on the first. She and low-handicap veteran Chris paired well, both contributing to the scoring of 21 points on the outward 9, against only 16 from the Common Room team, who at that point had no answer to this high-powered point scoring OEGS machine. However, they started the back nine with a string of 4 consecutive 3-pointers and brought the match level at 28 apiece after 13. A tense denouement then unfolded as the teams exchanged blows and stood on the 18th still level. The rest is history…our opponents had no answer to Claire’s gross par, as she drained a putt from 30 feet to win the game and ensure a 2.5/2.5 outcome to the whole match! Pity the cameras were not there to catch the final green jubilation but this was a memorable day for all the players and the OEGS team is grateful to the College team for turning out at such a busy time in the school calendar.

We hope to repeat next year and look forward to welcoming more OEGS members to the fixture. 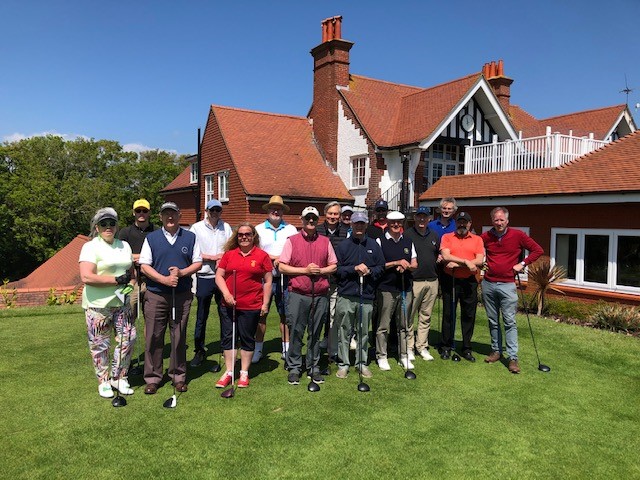